Winter is my least favourite season but I did love scrapping about it.

Today its officially the first day of winter and we are off to seek warmer places!!

If I’m absent from your blogs please don’t fret!! I will be back in the new year to leave you all some love!!

I used the Crazy Circles 12×12 sheet and I cut it in half. I used the opened circles as frames for these small wintery pictures. First I covered the chipboard in gesso and then I dabbed clear distress stickles and yellow stickles randomly on the circles

I also used chipboard snowflakes which I also covered in Gesso and distress stickles.

Finally for the title I used the word Wonderful and called my layout Snow Wonderful!!
I used the Prima BAP sketch as an inspiration for this layout.

I used the Prima BAP for this layout 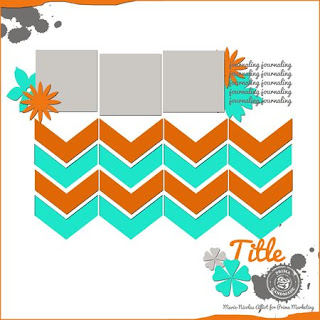 Materials used:
Prima papers
2 Crafty chipboard
Flowers: Prima
clear stickles
yellow stickles
gesso
Martha Stewart Textured paste
Crafter’s workshop 6×6 template
Ranger acrylic paint: yellow
Prima fluid chalk worn jeans
Prima resin bird
Prima alphas
My second layout is titled:
“Peaceful”
I took this serene photo outside the woods near my house. Those are the same woods from my fall pictures a few months back.
I quite like how the woods came to life in this photo.

I used the Hariet’s Border underneath he photo. I simply covered it in textured paste and then dabbed it with chalk ink.

I used Heidi’s Vines again for this layout. Last month I used them for a fall layout and showed you a resist technique. This time I covered the vines in gesso and then painted them with Shimmerz Paint: blueberry cobbler. It came out very smooth so I dabbed some blue distress stickles randomly on the leaves.

To get the 3D effect, I printed 2 of the same photo and used one of them as a background. I used the other photo and cut some trees out of it. Then I raised them with pop dots for a 3D effect.

Finally I used the Fine Snowflakes and the peace word from the ATC Words 1 pack. I covered the snowflakes in gesso and clear distress stickles like above and I inked the Peace word in fluid chalk ink.

I used the December sketch from Paper Stories as an inspiration for this layout.

I used the sketch from Paper Stories for this layout 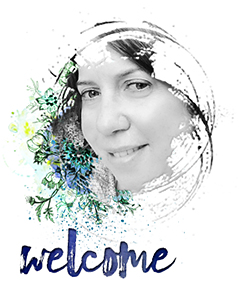 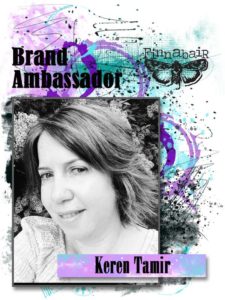